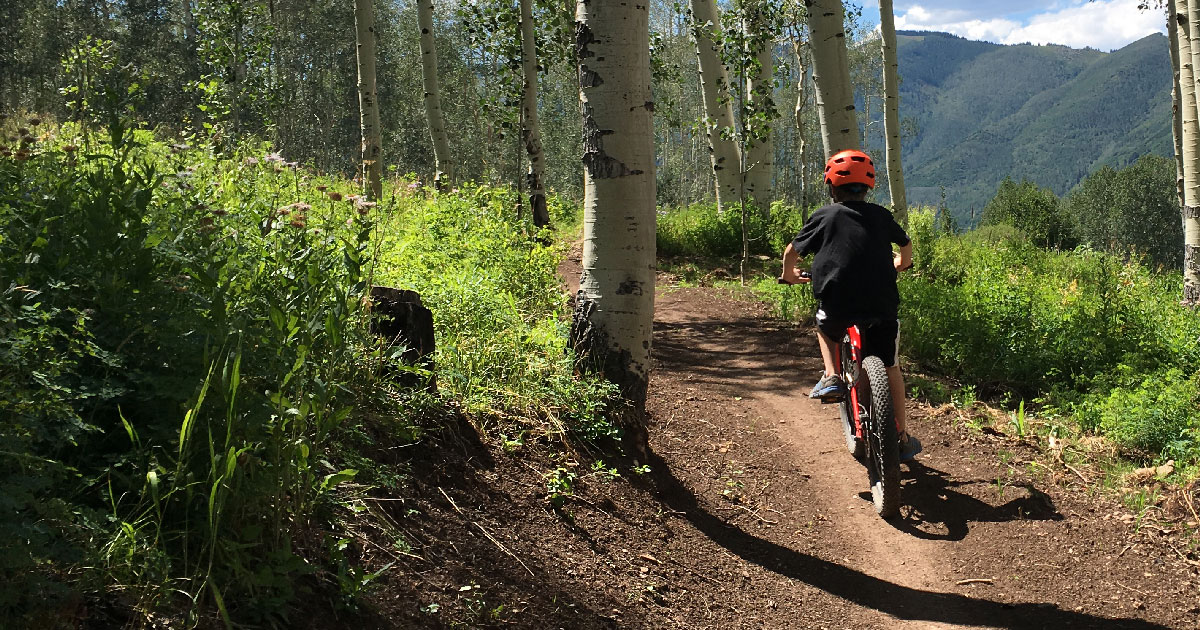 8-year-old Max likes to ride his his one-by mountain bike with his family in Snowmass, Colorado. No, its not the fancy carbon fiber frame single front chainring with an 11-speed cassette that his father rides. Its the old school six-speed 20-inch wheel handed down from his two older brothers. Not only is the bike older than he is, it weighs over half his bodyweight.  Anyone who rides bikes in the mountains knows that Max is not set up for most rocky mountain off-road riding.  But the addition of the new Discovery Trail in Snowmass has changed Max’s and his family’s mountain bike experience.  The trial is a mellow boulevard-wide climb that does not overly tax young lungs and muscles.  A rollicking roller-coaster ride on Village Bound trail is a fun way down from the Discovery Trail climb.

A mountain bike trail for the whole family

The Discovery Trail, added mid-summer 2017, is a two mile one-way uphill mountain bike trail gently climbing the lower Western side of the Snowmass Ski Area. A shaded rest stop with views overlooking the Ziegler reservoir and beyond is located at the  top of the trail. There are two routes down from the top of Discovery. The easiest of the two is the newly revamped Village Bound trail featuring mild rolling “whoop-de-dos” and banked turns. The other way down is the new Connector trail –  an intermediate trail winding through open fields and aspen trees.

The new beginner trail complements other family friendly trails in the town of Snowmass Village. After Max and his family descended Village Bound, they continued their journey down Tom Blake, Highline and Ditchline trails, eventually ending the ride at the swimming pool in the Snowmass Recreation Center.

Before the Discovery trail, Max’s cycling experiences have brought on a roller coaster ride of emotions. But now, with a new ride in the valley,  Max says he’s ready for more … and also wants a new bike for his ninth birthday.