You are here: Home / Public Announcements / Grandstaff Trail in Glenwood Springs is Open and Ready to Rock and Roll! 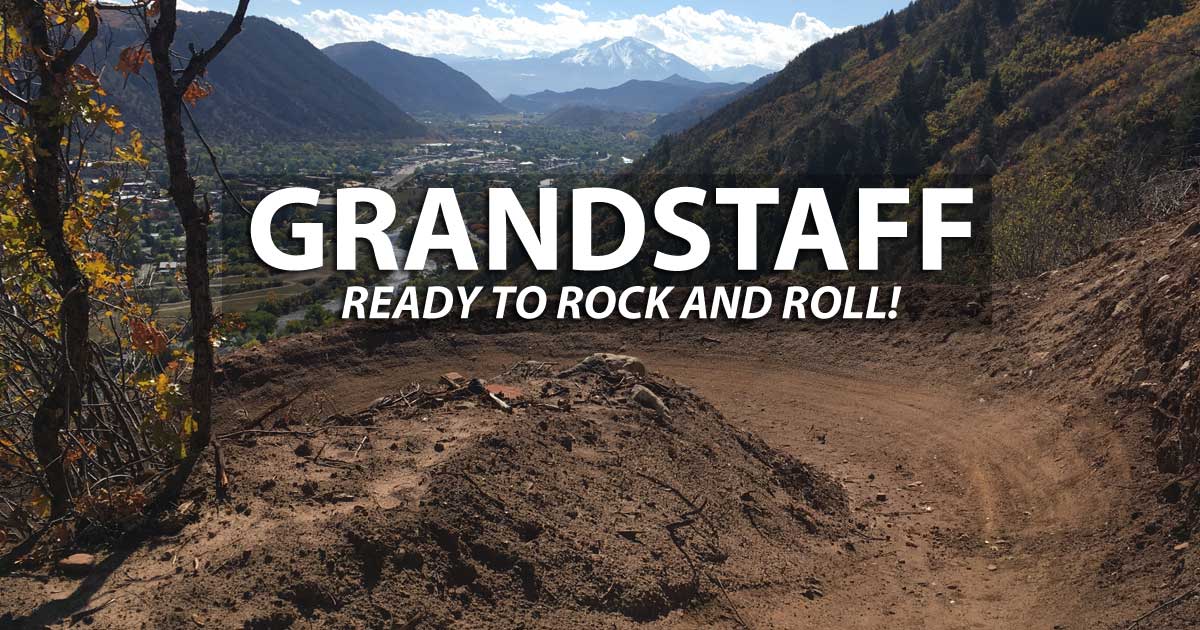 Grandstaff Trail is a worthy destination for everyone who appreciates big views, flowing dirt and rocky tread, bermed turns, optional air time, and yes, a bit of effort to reap a big reward. Climbing Red Mountain Jeanne Golay Trail (a gated 2WD road that quickly turns from pavement to dirt) is quickly becoming the preferred way to enjoy a descent on this trail.

While the trail is open to two-way bike and foot traffic, and the open view corridors at most of the turns are meant to minimize conflict between uphill and downhill trail users, many local riders enjoy riding up Red Mountain Jeanne Golay Trail given its consistent grade and plenty of shady spots. Or, consider starting from the Olsen Trail to add some fun flat mileage and avoid the small crowded trailhead parking.

Two historic upper trail segments have been improved with better turns, drainage, and plenty of optional rock jump features to roll or pop over. The remainder of the trail is professionally built, featuring a wide enough bench to allow for easy passing, and countless berms along with a handful of tight switchbacks. Grade reversals along the trail offer expert riders plenty of air time opportunities, and some of the berms even have optional high entry lines to help you keep your speed out of the turns.

Most of the trail is in thick oak brush terrain, with occasional massive views of downtown Glenwood Springs, the Roaring Fork and Colorado Rivers, the Flattops and even Mount Sopris in the distance. Evidence of the Red Mt. Ski Area that graced the lower slopes of the mountain from 1938 to 1966 are evident with the few chairlift towers that remain. The trail actually goes under one of these bright orange steel tower structures, which makes for a great photo op along your ride.

In addition to the Red Mountain Jeanne Golay Trail (road), you’ll find another older singletrack route on the mountain. Now called the Cross Trail, this fall line trail intersects Grandstaff with four-way intersections five or six times. Use caution at these intersections as the Cross Trail is popular with hikers and runners looking for a steeper and rockier experiences. While the Cross Trail is open to bikes, most riders will keep to the flow, speed and fun turns of Grandstaff.

Any visit to Red Mt. is not complete without a visit to the highpoint and panoramic views a couple hundred yards east of the top of the trail. Nearby, a tall steel cross hints at the long and interesting life of William Grandstaff, who prospected for gold in the area and passed away on the mountain in 1901.

With local commission and City Council support, RFMBA embarked on creating the Red Mountain Trail Improvement Plan during 2015, including a series of public feedback meetings and surveys. Following approval of this plan, funding commitments were secured during 2016 to implement the project. Many people who learned about this project during the planning process became aware of the high return on investment that modern soft surface trails can bring, both for the health and wellness of local residents, and the economic benefits associated with increased visitation.

Thanks to the City of Glenwood Springs, Garfield County’s Healthy Communities Coalition, Alpine Bank, the Catena Foundation, and RFMBA’s supporters and members, project work finally started in early June of 2017. Progressive Trail Design, well known for successful trail projects in Aspen, Snowmass, Denver, and beyond, utilized a small crew to refresh two existing segments of trail while carving and sculpting the new rolling tread and turns now known as the Grandstaff Trail.

With work starting at the top of Red Mountain, trail users have been enjoying the improvements and new trail as each segment was completed and opened to use by mountain bike riders, runners, and hikers. The completed Grandstaff Trail is a worthy destination for everyone who appreciates big views, flowing dirt and rocky tread, modern bermed turns, optional air time, and yes, a bit of effort to get a big reward.

Special thanks go to the good folks at Rof.net and Thirsty Corp. for their in-kind donations. They provided a full water tank, pump, hose, and labor to get a bunch of the new berms watered and packed down in the midst of a dry August!