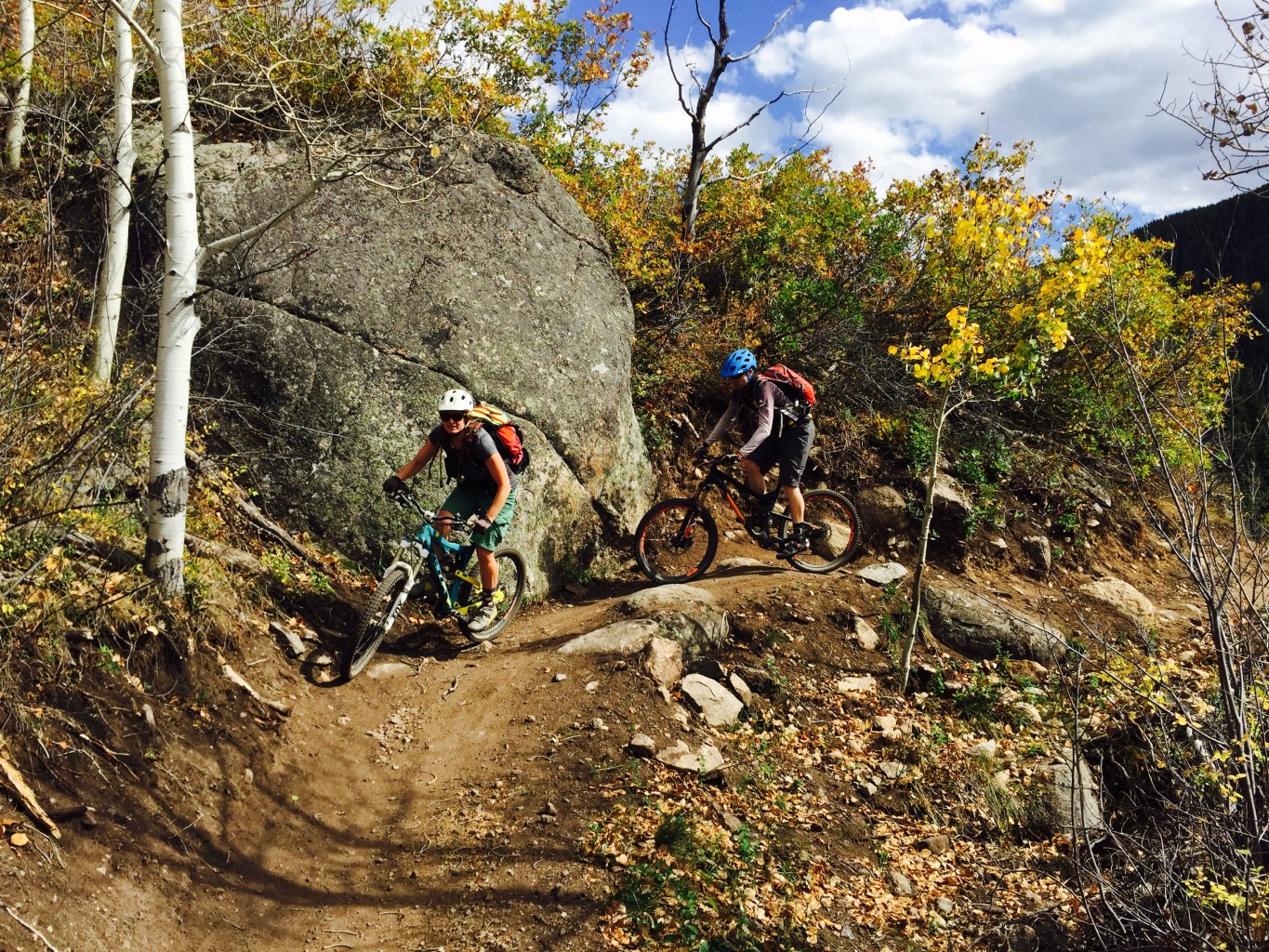 RFMBA’s work is focused on creating and sustaining the best possible mountain bike trail system and experience in the Roaring Fork Valley.  2015 has seen much progress on our mission:

(1) Volunteers building the Lower Lollipop Trail extension in Hunter Creek.  RFMBA advocated for this project over several years, and designed the alignment that was approved by the White River National Forest and the local entities responsible for annual implementation of the Hunter Creek – Smuggler Mountain Collaborative Plan.  Volunteers were organized through a public project with Roaring Fork Outdoor Volunteers, with funding provided by Pitkin County OS&T & Aspen OS&T.

(2) A professional contractor built the Hummingbird Trail in the Hunter Creek.  Similar, to the Lollipop Trail extension project, the vision for this trail was advocated for by RFMBA during the Hunter Creek – Smuggler Mountain Collaborative Plan.  RFMBA’s original design called for the trail to ‘traverse’ the steep hill side with fewer switchbacks, but the final alignment was approved as a compromise that leaves a larger area of the landscape un-fragmented by trails.   This project’s construction was funded by Pitkin County OS&T.

(3) IMBA’s Trail Care Crew visited both Glenwood Springs and Aspen to present “Better Living Through Trails” and train up locals through their Trail Building School.  TBS attendees spent a classroom morning at the Sky Hotel, and then put new skills to work in the afternoon on the Lollipop Trail extension.

(4) City of Aspen OS&T hired contractors to build long desired soft surface trail connectors including the Deer Hill Connector from Burlingame to AABC and the Burlingame Connector to the Rio Grande Trail.  These high quality trails, while short in distance, provide an opportunity for creative riders to study the maps and link up longer rides in the upper valley, staying on dirt for a great portion of their ride.

(5) Aloha Mountain Cyclery, an RFMBA sponsor, closed their shop for three Sundays of official trail maintenance on the Crown BLM and Prince Creek Trails.  RFMBA organized the work days with BLM and RFOV, ensuring crew leaders, tools, and a work plan were provided for volunteers.  Aloha provided the pizza and drinks after some hot work days.  This 2015 summer effort was notable as it was the first official trail maintenance work conducted on this part of our local BLM lands.  While the trails in the area were ‘social trails’ not very long ago, they became official system routes with the BLM’s spring 2015 signing of its Resource Management Plan.

(6) RFMBA worked with IMBA’s Trail Solutions program to create and release the Glenwood Springs Area Concept Trails Plan.  This concept plan quickly lead to ongoing work on both the South Canyon Trails Plan, and the Red Mt. Trail Improvement Project.  Both of these projects are expected to see public drafts before end of 2015.

(7) Crown BLM officially named the Crown a Special Recreation Management Area with focus on mountain biking experiences; this process also brought many of our favorite trails into the official travel management system.  RFMBA was involved with BLM’s process over a number of years leading up to this designation.

(8) RFMBA is in the early stages of ongoing work with area land managers and the White River National Forest to provide legitimate fat biking opportunities.

(10) The existing Buckhorn Traverse trail was greatly improved by a strong crew from the Rocky Mt. Youth Corp, taking the trail from a narrow social trail to one with a sustainable bench and backslope, allowing a wider range of trail users to enjoy the trail in the future.  This project was undertaken per RFMBA’s request with funding provided by the BLM.  This trail will be part of a longer loop of mostly BLM trails that are expected to come online in 2016.

(12) Since the Airline Trail opened on Sky Mountain Park, RFMBA has encouraged City of Aspen OS&T to pursue a connector trail on the open space property that connects base of Buttermilk’s parking lot towards SMP.  While this project was somewhat delayed by ongoing planning for a major widening of Aspen’s airport runway, the project broke ground this fall, and started seeing it’s first use before the winter season’s first snow cycle.  Signage is not yet in place, so take care while crossing Owl Creek Road.  Many thanks to Aspen’s OS&T for funding and executing another important trail project!

Your membership helps us to grow our collective voice so that we will see continued evolution for our trail systems.  Next summer looks to be a great one for our local trails as we expect and hope to see a number of trails constructed on our public lands: