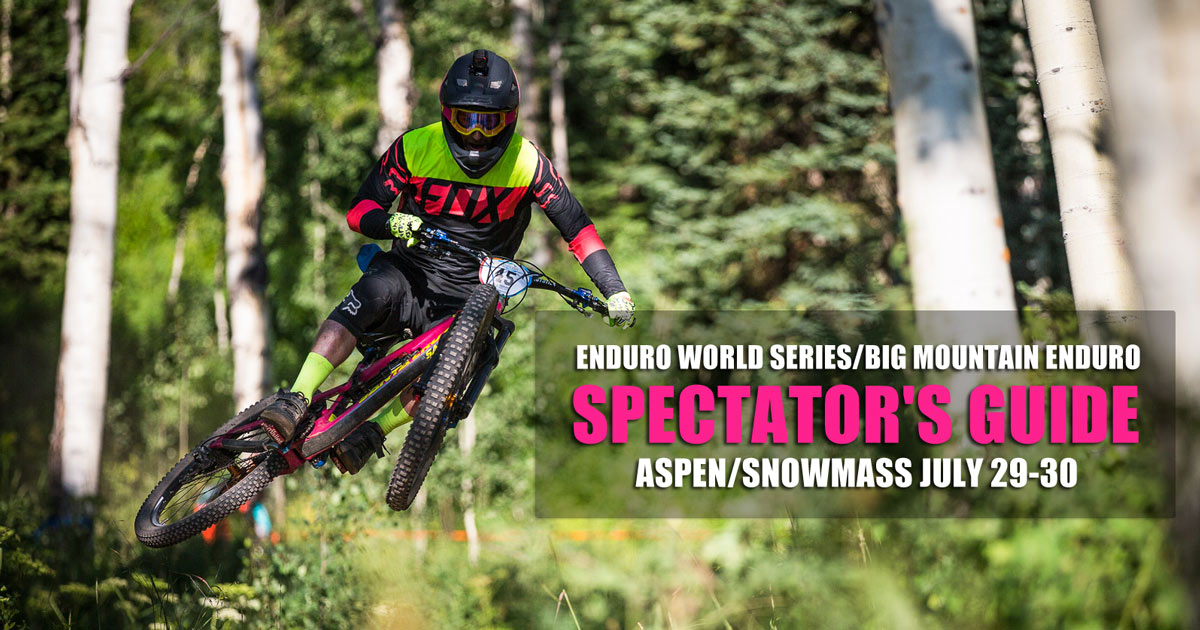 The best mountain bikers on the planet return to Aspen Snowmass this week for Round 6 of the Enduro World Series, and local cycling fans won’t want to miss a second of the action! But with 400 racers spread across 6 timed stages, 17 miles of race trails, nearly 13,000 feet of descending and two days of racing, even the most seasoned trail junkie can feel overwhelmed trying to keep up. Here’s the insiders lowdown on each of the weekend’s stages.

To get the best access, become a course marshal volunteer for a day or two.  It will be an experience like no other.  Click here for info on how to volunteer for the BME/EWS.

Otherwise you can always pack up a lunch, bug juice, sunscreen, rain jacket, refreshments or whatever you like or need on a day in the outdoors.  Then hike or bike up the mountain to check out all the action of choice.

The main sponsor village/expo area is at the Snowmass Plaza area/Snowmass base village.  If your travels go through the Expo, be sure to stop by the RFMBA tent to find out all about the  latest trail plans and advocacy we are involved in – you can also join or renew your membership. 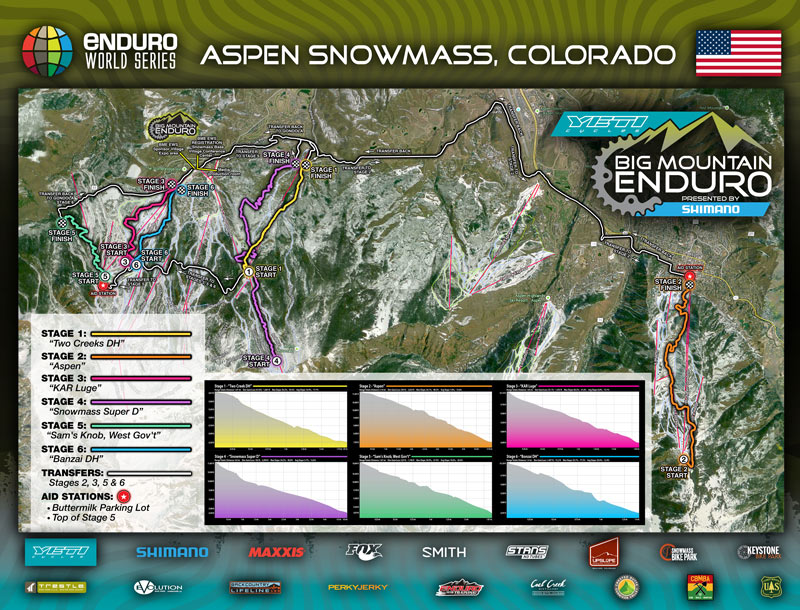 1: Two Creeks DH – Beginning at the top of the Elk Camp Gondola, this race-only trail heads straight down the fall line in the woods between the Cascade and Creekside runs. Racers will cross Valhalla twice before linking up with the “Sequel” trail for a high speed burn through fields of wildflowers toward the base of the Two Creeks chairlift. Spectators won’t want to miss the upper 1/3rd of the track with its steep plunges and dramatic road crossings.

2: Aspen Mountain – The crown jewel of Aspen Snowmass’ winter offerings, the Silver Queen represents the longest stage of the weekend, with over 3600’ of descent spread across 4.8 miles of classic Colorado singletrack. Spectators should check out “The Dumps,” where racers will sprint between 180° switchback turns down local favorite double black diamond ski terrain, or post up with a beer at Ajax Tavern to watch the last few turns down Little Nell trail.

3: K.A.R. and Luge – The first of three race stages on Snowmass’ old school west side singletrack, Stage 3 begins at the top of the Coney Glade chairlift, plunging down through the Aspen groves toward base village. Families with kids will love seeing bikes make use of their favorite winter tree trails off of the Kid’s Race Arena and Lizard Lodge, a quick hike from the upper drop off point for the “Top of the Village” shuttle bus.

4: Snowmass Super D – Beginning at the top of the Elk Camp Chairlift, Stage 4 will be a true endurance test for our visiting racers, and should represent the greatest variety of terrain they’ll see in a single stage. After a couple quick turns on the Vapor trail, racers will turn down the fall line on a yet-to-be-named ridgeline singletrack popping in and out of the dark timber of the Grey Wolf ski terrain. A brief visit to the flowing berms and tabletop jumps of the Valhalla trail will lead into the classic flowing singletrack of the Powerline and Starks trails. Hardcore downhill fans will want to perch high on the ridgeline where they can get a preview of the fastest lines on Snowmass bike park’s newest trail.

5: Uncle Sam’s to West Government – Nobody’s going to win the weekend on this stage, but they could easily lose it, as Stage 5 begins on the tire popping scree fields of upper Sam’s Knob before diving into the old school tight switchbacks of the West Government Trail. Spectators will find the challenge of reaching this stage well worth the effort, as racers charge through the rough and raw descent of a reclaimed 1960 vintage chairlift install road. Check out the old Campground liftline between Bearclaw and Wildcat for some of the steepest pitches of the entire race.

6: Banzai DH – The final stage of the weekend is also one of the hardest, which is why it has hosted high level gravity racing going back over two decades. Descending 1500 vertical feet in just 1.4 miles from the top of Coney Glade straight down the fall line toward the EWS awards ceremony in Base Village, it’s the shortest stage of the weekend, but also the stage the racers fear most. A heavy mix of high speed ridgelines, rooted catch-berms, mandatory airs (at least on the fast line), and of course the infamous “Hell’s Kitchen,” Banzai is sure to provide excitement for fans of all ages. Follow the sounds of hooting and hollering up to lookers left from the bottom terminal of the Coney Glade chair.